Their story started with a night of talking and drinking beer until the morning in Fekete Kutya. Who courted whom first? It doesn’t matter anymore, as now they share an office, a home, a bookcase designed by the two of them and recently a beautiful child, too: Soma. We interviewed architect Zita Csaba and graphic designer Ákos Polgárdi.

Zita: We first met at 81font. Ákos rented a place from Peti Szendrő as a freelancer, and I worked there as a fresh graduate for six months. I fancied Ákos from the very first moment, but I didn’t think it could develop into something more at the time. And then one day, we went to Fekete Kutya after work to have a beer, and we talked until the morning. I think everything started there, because after that I simply couldn’t stop thinking about him.

Ákos: To be more accurate, our friendship and love started by Zita wooing me, and finally I gave in.

Zita: In the beginning, we worked separately – I worked at several architect studios and Ákos rented a place for himself in a smaller office. Then three years ago I inherited an apartment, but we didn’t want to move into it at the time, so we turned it into a co-working office suitable for ten people. At that time I was also a freelancer, so we started to work at the same place, but in separate rooms intentionally: we chose two desks at the two most remote points of the flat.

We haven’t had a common paying job yet, but we had a joint project: our flat, which we started to furnish the best we could depending on our possibilities. My favorite is our bookcase, which we designed and assembled together when we moved in to our previous place. Luckily our current home has the same height, so we could move it without any problems. We only had some trouble unscrewing it, we fixed it quite firmly back in the day.

Ákos: To be honest we don’t really have too many jobs together, but we do ask for each other’s opinion about our projects, and sometimes we even help each other. I always photograph Zita’s completed works. And when it turned out that we were expecting a baby, we transformed the co-working office Zita mentioned into a flat, so the co-working team consisting of our graphic designer and architect friends moved to District V, and if I don’t work at home currently, I work there too.

Zita: Ákos is not only good at designing, he also communicates effectively with clients. He can present his ideas in a convincing and positive manner, and so usually everyone accepts it that he is competent in professional issues. I love this self-confidence about him and I also envy him a little, because this is not a strength of mine.

Ákos: I have trouble with the expression “inspiration”, but I love watching Zita work and immerse in designing. Only Heroes III can put her into a state of flow like this. By the way I also admire and envy a little good architects, and Zita is a very good one!

Zita: We always show each other the projects we are currently working on. We ask for the opinion of the other, and we also tell what we think frankly.

Ákos: I am quite inconsiderate, in the best sense of the word.

Zita: A beautiful family and lots of family ski trips.

Ákos: My professional dream is creating a mini Snøhetta, that is a multi-disciplinary design office, which can take both a public building design job and a bank note design project. With that in mind, if we love each other and our work the same way we do now in 30 years, but we don’t have a common office, I will still be satisfied.

Zita: My mother is a midwife, and with her help, Soma was born at home, and so we could experience the challenges and joy of his arrival in the serenity of our home.

Ákos: The greatest experience of my life was the birth of Soma.

Architect Zita Csaba graduated from the Department of Architecture of BME in 2014, her diploma project won the diploma award of the Chamber of Hungarian Architects and the Association of Hungarian Architects, as well as the audience prize of the Media Architecture Award. He completed Cycle XXIV of the Építész Mester Egylet Mesteriskola (Architect Master Society Master School) between 2016 and 2018. As a fresh graduate, she worked for several architect studios, and regularly worked on interior design projects already at that time. Later on as a freelancer, she also worked on interior design jobs mainly. Her main profile is designing apartments. Usually she works by herself, but she has also teamed up with others for certain projects, for example with the architects of FLO.

Graphic designer Ákos Polgárdi was raised in Balatonfüred, graduated at the Department of Liberal Arts at the University of Szeged as a philosopher, but he also attended the philosophy doctoral training of CEU and the department of graphic design at KREA. He has been a freelance graphic designer since 2013; he primarily focuses on visual identity, publication design, information system design and all kinds of typography jobs. In addition to his freelance works, he also co-designed several public space installations, monuments, he teaches at the Typography Vocational Training of METU and is a founding member of SUBMACHINE graphics collective.

In our Artist duo article series, we ask artist duos we love and respect (spouses and creative duos) about the same six topics.

An ingenious solution was found in Kobeřice, near the city of Brno. For this village of seven hundred inhabitants, architects at Atelier Walter designed a multifunctional wonder where you can spend your waiting time with a little sightseeing. Atelier Walter has designed a compact bus stop that, despite its size, 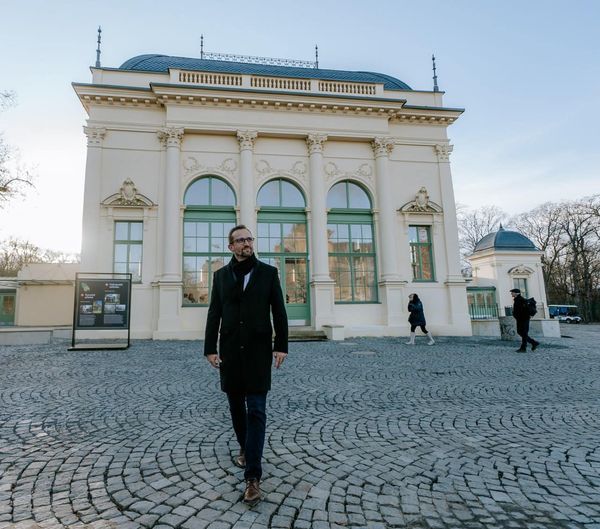 The restaurant, built in 1891 and located in Prague’s Výstaviště exhibition area, stood abandoned for years but has now been completely renovated and will soon open its doors to the public. The refurbishment of the Bohemia restaurant is part of a long-term plan to revitalize the entire Výstaviště. The