She got from Gyula to Cambodia, traveled around the world, and finally returned home. The adventurous story of self-taught photographer Vivien Arató did not end there. With her husband, they now deliver fruits and vegetables with harvesting freshness to many places in Békés County.

Viven Arató has always imagined a job that fills her with joy. For her, staying in one place and eight hours of office work a day didn’t even matter: she was looking for something to connect business with pleasure. She vividly recalls the moment when she answered in the work center of Gyula that she really wanted to make a living from photography—a sad half-smile appeared on the face of the administrator sitting behind the counter. For a year, she studied photography in an intensive, self-taught way, and as usual, her friends posed as models for her.

Vivi then left the small town in Békés County behind and moved to Budapest in 2014, with only twenty thousand forints in her pocket. Slowly, she managed to build her own clientele: she regularly collaborated with bloggers, worked for Heavy Tools, and became one of the official photographers of the Dorko brand—her black-and-white portraits of Hungarian artists can still be seen on the pillars of the former Erzsébet Square bus station (now Fröccsterasz).

When she returned from her three-month European backpacking tour in 2017, she no longer found her place in the photographer’s scene. The experiences gained during the travels further reinforced in her the need to discover new worlds from time to time. Although her parents and friends were afraid when she went on the European tour alone, for example, she says it is much scarier for her not to embark on a big adventure out of fear of the unknown. In addition to photography, she felt she needed another profession: she started working in graphic design and web design. She is currently designing a new website for Stickl Yachts, a manufacturer of special electric boats, as well as being responsible for taking photos and videos.

Vivi, of course, wasn’t always alone: she and her pharmacist partner had also gotten around several times, and their experiences while traveling were written on the Untoldeed blog. As part of the special travel diary, a hundred useful tips have been gathered for those who would travel with little money but with a greater desire for adventure.

“I would definitely wake up in the countryside, the play of lights filtering through the shutters and the morning rooster would be my alarm clock. I would eat corn, feed chickens, climb on a ladder and taste the ripe, sweet cherries. I would pull out the crunchy carrots and fragrant vegetables from the richly growing garden land, and then learn all the ins and outs of an unadulterated Sunday lunch from my host.

Later I would rent a kayak to follow the winding course of the Körös rivers. Gently winding the waves, I would marvel at the diversity of local wildlife, the singing of birds, the thirsty fallow deers venturing out of the trees of the forest into the receding waters.

Then I would go cycling around Lake Balaton. Walking from hilltop to hilltop, I would discover the castle ruins around Badacsony. Following the purple lavender fields swaying in the wind, I would get to Tihany, the city of echoes. Approaching Siófok, I would be enchanted from afar by the special blend of coconut sunblock, freshly baked hake and the cheese and sour cream lángos. I would feed the invading mute swans with pieces of bread. With a slightly warmed body, I would run into the Lake Balaton and float on the inflatable mattress to eat up the extra salty corn on the cub. In the meantime, I would like to say how good this »Hungarian sea« is.”

So far, everything like this seems to have ended as best for Vivi as possible, even if the original plan had to change in the meantime. Such was the case when, in 2020, she and her partner decided to set off with a converted Pajero SUV after the wedding, but the coronavirus intervened.

The world is closed, and they stayed in Gyula. A friend of the family who worked in agriculture complained that he could not sell the cucumber and eggplant crop as the restaurants closed. Not only this close acquaintance, but many others from local small and primary producers were in a similar situation—and Vivi and her partner saw that they had all the tools to start a business to help them, and they tried themselves on a hitherto unfamiliar path. This is how the Zsenge Piac (young market) was born.

Vivi took over the structure of the website, the design of the logo, the brand identity and, of course, the making of the photos, but she is not only responsible for managing the creative work processes: she and her husband will set off to the Szeged producer market at three a.m., where they will select the best of Viharsarok from the crops and products of hundreds of producers. In the online market, shoppers can place their orders until Wednesday evening, and the next afternoon they will already receive the goods with harvesting freshness, which Vivi and her husband themselves will deliver within the twenty-five-kilometer catchment area of Gyula. There are the two of them, so coordinating logistics tasks is especially important. The minimum order is 3,000 forints, but delivery is free (this is one of the reasons why they are not delivered throughout the county). There are usually fifty or sixty types of products to choose from at the webshop, by the end of the summer this number will usually climb to over eighty.

They say not only the goods available from them, but the business itself is seasonal: from May to late autumn, Zsenge runs, guaranteeing that seasonal vegetables and fruit are always on the countryside tables. One might think that there may be a demand for such fruit and vegetable home delivery only in Budapest or in larger rural cities, but this is not the case. When we ask who buys from them, Vivi says, not only have creatives and young families moving back to the countryside got a taste of Zsenge, but the older age group has also become more and more friends with this form of shopping. They are happy to order from them, and seventy percent of customers are returning customers. During the deliveries, Vivi and her husband are happy to establish a personal relationship with both their customers and producers, and are open to any needs that may arise.

They didn’t think so themselves, but Zsenge also has a serious community-building power that they, as well as from traveling abroad, can draw on themselves. Vivi says they will also do the Zsenge as long as they find joy in it. The idea of a bistro has already sprung up in the minds of young people as a long-term plan, where fresh, nutritious, vegan and gluten-free dishes will be made from seasonal Zsenge ingredients.

A Polish artisan brand with generations of family legends, hand-picked herbs, and two endlessly devoted gin enthusiasts. We asked Marcin Czajkiewicz, who created Magnolia Heritage Gin with his wife Aleksandra. Your brand’s name is ‘heritage’—what’s the story about your heritage, and why did you choose to build

Budapest’s gastronomic scene is a constantly changing and dynamically evolving universe. If one place closes, two others are likely to replace it, but there are restaurants and cafés that somehow leave an unfillable void. Chef Dániel Varga quietly returned to the capital, but his cuisine made such an impression 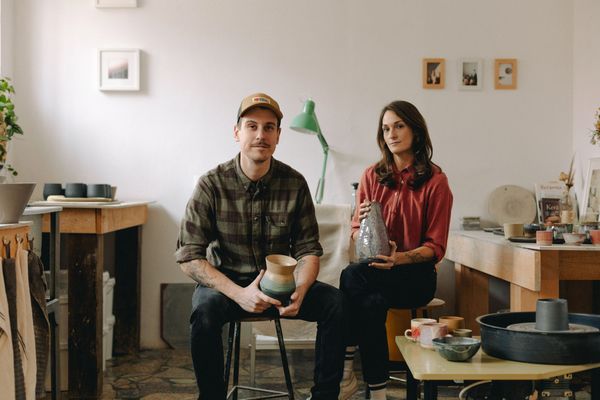 Some people are ready to accept a little guidance from life, while others take a more intricate path to their destiny. But when we are in our place, everything suddenly takes shape—sometimes out of clay. Discover the story of Eszter Gyalog and András Lukács (Luki), founders of the Marēk
A weboldal sütiket (cookie-kat) használ, hogy biztonságos böngészés mellett a legjobb felhasználói élményt nyújtsa.